Honestly, coming up with titles that rhyme with doll is way too easy.

In working with the dolls I purchased, I am functioning in a new manner photographically. First of all, I now have some conceived idea before I start shooting, as opposed to the usual process of self-portraits where I get in front of the camera and see what happens. But I’ve mentioned in previous posts how that process had already begun to bore me; in fact, last night I pulled up an old hard drive and was looking over some of my earliest self-portraits, and was a bit amazed at how much more I was able to pull off back then, when the posing was still new. I was using sheets tacked to a wall, no lighting, and a $150 point-and-shoot camera, but I still managed to create some pretty cool images. But as with all things creative (for me anyway), a process does grow stale, and I have to explore some other avenue. I know I’ve said it a million times, but I just don’t have many unique faces left to make, or costumes to put on that aren’t derivative of something I’ve already done, or leaps to make that I haven’t already, well, lept. So yeah, anyway – dolls.

My point is, working from a plan or vision can be incredibly intimidating when one is not used to doing it. With the more spontaneous process, it was pretty rare for me to come away from a shoot disappointed in every single shot, because I hadn’t known what I was looking for to begin with. But it does happen when trying to re-create something photographically that I’ve envisioned in my head. It gets a little scary to even try, for fear that I will put a lot  of work into something that produces no decent, tangible results. But as I think I said in my last post, even if I flop with some of this stuff, I am at least learning what not to do, and can apply those lessons to the next session. And it’s not like I was never disappointed when shooting selfies. I remember one session that I was so excited about, only to find out when I loaded the photos onto my computer that the color balance went crazy (this was with my first, very old Canon Rebel, the original of that line) and I was horribly green in everything and could not repair it for the life of me. Or the time I got dressed up and posed for an hour only to have the CF card lock up and lose everything! So you know, it’s always something.

So here is a photo that I visualized so clearly, and which seemed so simple to pull off, that I spent 6 hours trying to force it to work, because I just could not accept that it had been a fail. It’s not horrible, but it is not at all as convincing as I thought it would be:

I knew Madame Alexander made both angel and devil dolls, and after my first purchase of the Spain doll I photographed earlier in the month, I got the idea of having an angel doll on one shoulder and a devil on the other, while I looked confused, or amused, or..something cute. Anyway. First of all, I spent a pretty penny on that stupid devil doll, which came to me a hot mess; her outfit did not fit and was clearly not made for her, she was old and loose and difficult to pose (in fact, before the end of the shoot her arm fell off) and she looked really old. On the other hand, that angel doll was quite cheap, and it is exquisite – a really beautiful doll. Go figure. I think I pulled the poses off fine – and I must add that I did a hell of a good job contouring my nose with my makeup on this day, which I usually botch up terribly. And I was very meticulous about shooting each doll standing on the same fuzzy sweater (which I stretched over a stool) and to shoot them in the same light, and in basically the exact same position they would be in were they actually on my shoulders. But in spite of all that, they just would not work in the composite shot. I thought the fact that their feet would be on fuzz in each shot would make them easier to stick onto my shoulders, but the blues didn’t match and wouldn’t mask right and it just looked phony. I did the best I could, but this is so far away from what I envisioned, and I don’t think the end result is nearly as entertaining as it had looked in my head. Plus, six hours editing y’all. And in the end I still wasn’t happy. The devil in particular just looks awful. I couldn’t pose her very well to begin with, and she never did look like she was really standing on my shoulder, she just looked glued on. So I used a clone tool to add some more fuzz to her feet and called it a day. Sigh.

Then, I took a bunch of shots of the angel because she’s just sooo pretty, and although I still have some others of her to process, the one I chose to work with first was also a bit of a fail, in my opinion. Since the arm had already fallen off my devil doll, I got the idea to make the angel have four arms, and scrambled around in my box of doll parts to find one. When shooting these photos, everything looked so nice and colorful – all that pastel pink and blue – but when I went to edit one of them, it just didn’t make much sense. It’s a doll with extra arms, and that’s about it. It doesn’t communicate anything, and she’s just kind of lying there doing nothing. Bummer. 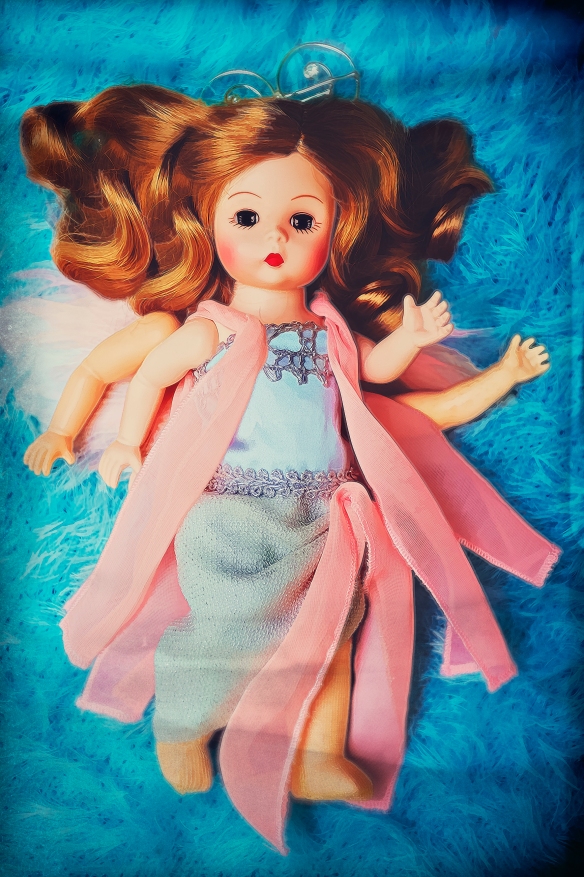 I edited the hell out of her to try and make this connect with me better, but it never did. I think my biggest issue with her was that her body was made in such a way that she is not facing the front entirely; her body is a bit twisted to one side, so try as I might I never could get her to look like she was really lying down in a peaceful manner – she just looks like she has either scoliosis or restless leg syndrome. I added a boatload of filters to try and turn this into something, but in the end I just stopped and considered it as good as it was going to get.

One thing about that first shot, the angel and devil one, was how easy I thought it would be to pull off, and how wrong I was about that. I’ve done other simple composite shots quite successfully, and they did not take much time to execute, and I really thought I planned out how to put that one together well to get an excellent end result. But I was wrong. On the other hand, this idea for what I have titled “Doll Soup” I thought would be a real bitch – and it was the easiest thing I’ve done yet. 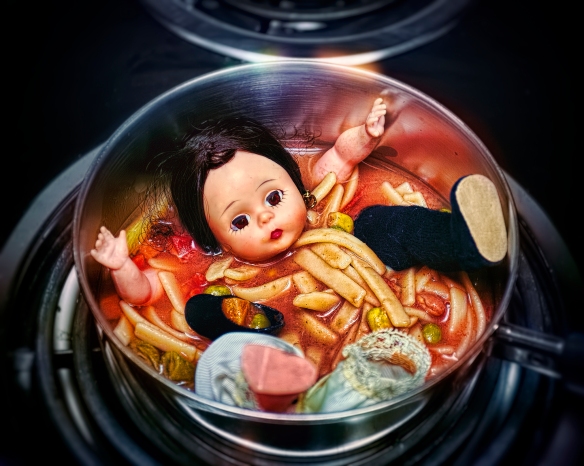 This past Saturday afternoon, about two hours before I needed to go into the school and work for a bit, I got an urge to try out this shot I’d visualized some time before. Even when talking to Doug about what I wanted to do after I first thought of it, he agreed that it would probably be quite difficult to get the doll placed in the soup just right, and then keep all her doll-parts posed while I took the shots; he even thought I might need to put something like styrofoam under the soup to keep it all “floating” properly around the doll parts. Nope. On a total whim, I took the can of soup, dumped it in this small pot, then placed first her head, then her arms, then her legs into it (she is disassembled, BTW). First time trying, everything fell right into place, and proceeded to stay there while I not only took about 40 or 50 shots in the kitchen with two different lenses, but also while I moved the pot into my studio to take shots of her in there. And there was no great planning to any of it: stick doll parts in soup, take photos, done. But in the end, these are the best shots I’ve taken of the dolls so far. At least as far as realizing a vision is concerned. And, I took them in a rush without much prep at all, right before needing to rush out the door to take care of errands. Certainly not my usual routine for creating quality work.

This next one, which I took in my office, didn’t come off quite as I pictured it, but it’s certainly close enough to satisfy me:

It did take some time to get myself positioned right in front of the camera for my mouth to show properly, but again, that little doll head posed like a trouper throughout the whole ordeal. Tons of shots of me picking up that spoon and posing, then dipping it into the soup to get more noodles or whatever, over and over, and still – she didn’t budge. Good doll.

I really don’t think I needed to edit this last shot; the first two are the real winners. But after the disappointment of my angel and devil shots I was excited to play around with some that were at least close to what I wanted to see, so I kept going with them.

Who knows what’s next with these little gals – they are unpredictable for sure, but always up for a shoot. As for me, I start back to work tomorrow, so wish me luck. Another semester is up and running!