I’ve got nothing much new to say, so I’ll share an old poem instead. This is one of several atomic bomb poems I wrote many years ago after my father-in-law told me stories about them (he did three tours in Korea, and before he was shipped overseas to fight he was dropped off in Nevada where the US government was testing atomic bombs by dropping them on soldiers to measure the effects on humans, among other things). His stories got me interested in all these atomic bomb tests carried out in the 1950’s and early 60’s; this particular poem was based on an eyewitness account I found online of the very first bomb drop ever conducted on American soil. It was written by one of the two men who’d been stationed out in an old shack in the middle of the desert, and it described them sitting outside at night watching the plane inch closer that would drop the bomb right on top of them – no one knew what was going to happen, and they didn’t know what to do except sit there and wait.

The desert floor is crumpled as an old photograph,
sand as cold as fisheyes. Joshua trees surrender

like enemies in the distance. The coyotes
are crying on cue, howling their presence to the moon,

the moon a zygote in the sky, an untreated wound.
They insist this moment matters, not the one

for which you wait, when the bomber banks right
and the world goes white. There’s a pulse

in the eastern sky – humming high over the horizon,
a heavy underbelly flashing red. Remember this.

The moment you embrace your nothingness.

I feel like yesterday’s post was so lame, that I need to write something tonight to move it off the main page, so to speak – but, I am preoccupied by things I’d rather not write about, because they’re not terribly important and are totally fixable if I’d just yank myself up out of this unhealthy rut I’ve been in for a few years now (I currently weigh more than I ever have in my life, and it’s pissing me off, yet it’s totally my fault for eating like crap and not exercising, so I’m not going to sit here and bitch about it. Except that I just did).

So, I’ll share a poem instead. I have over 400 poems collected from back in the days when I used to write, and the best ones I feel I’ve already shared here. But I have loads of them that aren’t what I’d consider my best work, yet still aren’t bad, so on occasion I throw them up here and see what happens.

I wrote this one after viewing a documentary of the Holocaust, the title of which I cannot remember. One of the camps it focused on was Treblinka, in Poland. A survivor was discussing how birds would land inside the camp, and guards would shoot them, because they were concerned the birds might pick up human remains and carry them outside the camp, essentially providing evidence to the outside world of what was really taking place inside. This witness made a statement to the effect that not even birds survived Treblinka (I’m paraphrasing, I saw this documentary well over 10 years ago). The idea stuck with me, and eventually I wrote about it, so here it is.

At first, there were birds.
Black ravens with wings
we envied. They unearthed
scraps of skin and bone
from the ash until guards
in their towers
gunned them down
so they could not
bear witness. At Treblinka,
the master’s eye
was even on the birds,
while prisoners
dug trenches, pipes
funneled fumes
into chambers, and smoke,
heavy with bodies,
colored a creatureless sky.

We could not save them.
We could only endure
each new arrival
until the shower of bird
and bone from above
exhausted our concern.
It was only the fate
of ravens, after all, and ours
was not to worry
with the destiny of birds.

But now they have returned,
black-winged and chatterless.
The ravens are building
nests above our heads –
bone-nests, nests of teeth
and infant hair. Later,
we will call them down,
let them flutter among us
with the gaveling of wings,
allow them to unburden
their testimony of bones.

I post this poem every year. And by the way, I hate fireworks. They’re stupid and they upset my dogs, and where I live it’s legal to stand around in the cul-de-sac like a moron and shoot these idiotic explosives into the sky while simultaneously downing copious amounts of Natural Light and keeping the kids up way past their bedtime. God bless America. OK, I’m not actually this surly. I’m only partially serious.

The streets are sharded with bits
of confetti, petty patriotic explosions.

The neighbors are still asleep, tucked beneath
what’s left of the gray haze hovered over
their driveways, their skin singed with sweat
and sulphur. Backyard dogs react

to a distant siren, their howl like rust
on a chain-link gate, like sparks
from a blacksmith’s hammer.
When they are done, the dawn
is heavy with calm. Neatly numbered curbs

One rubber sandal in the center
of the road, elastic casualty
of a manufactured battle, points
its open toes towards concession. 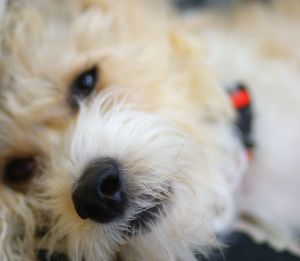 When I lie down and press my face
against the bristle of his body, and hear
his dog-heart in my ear, I think
how definite death is, his animal life
so much shorter than my own, so real
I can already feel the loss, dank
and heavy as his breath,
but loving him anyway, loving him more,
perhaps, because of it, the way I love
all things I know won’t last. Once
I was told that they have no sense
of time, that, to my dog, after I leave
it’s as if I never existed, but when I come back
he has no memory of my absence. And this is why
he occupies his time with bathroom trash
and sofa cushions, reducing all I’ve left behind
into a ragged nest of moments. And this is why
I think of death when I lie down at night
by his side: because his life without me
is simple, because the death
I am afraid of is my own, because each time
I come home I am born again.

My sister never washed her face at night.
My grandmother smoothed cold cream
over hers in dutiful faith the makeup
would slide off like dirt on a screendoor
during rain. When I was twelve my father
grew a silver beard, unmatched
to his coal gray hair. My sister’s eyes
always rimmed in black, balls of tar
in the corners like that
of the family cat. Grandmother’s face
smeared with Vaseline – she must
have collected particles of dust in the creases
during sleep. Father shaving it off
when he saw himself in the Christmas pictures
that year. My mother never loved
the mirror, expressed disgust at its faces as if
she were opening the door to discover
the visitor, an enemy neighbor.

At a lakehouse in Brownsville owned
by my father’s company. It had a bow-limbed tree
we climbed easily. A gravel driveway
ground like bones beneath our soles.
And bunkbeds where we fought for the top.
Where my sister in the upper bunk stuck
a tape recorder out the window
into the branches during a lightning storm.
Next day she played it back and swore
there were angry voices whispering
in the tinny wind, made us listen
over and again until convinced. Angry
in that way a whisper can be louder
than a shout. The way mothers threaten
with their teeth set
together. We sat on the floor for hours
trying to decipher what they say.

More at We Write Poems

when i imagine you
leaving this world
i envision the axis of the earth
tilting off-kilter
just a bit, the seasons
altering to fit
into the soundless void
you leave behind

one single impression
a river of stones

i admit i love you more
than the other, the one
we brought home healthy
from the shelter, the one
never under quarantine
to prevent contamination,

your tired body touched
only with gloves
those first four days
which i am still making up
to you, the one i love
more