I went out with a friend to scout locations this afternoon for some upcoming shoots and took some pics while we were checking things out. Last week I booked a studio near my house that has what’s got to be the worst website ever – very little useful information and almost no shots of the space available, but I knew the area where the studio was located and figured it would be OK so I went ahead and reserved it. All weekend slots at this studio are already reserved into next year, so I had to get time during our spring break so I can go over there during the week. I’m hoping some of my friends will be willing to come along, so I don’t have to take photos of myself while there, but I made sure to block out enough time that I can take self-portraits if I need to. The space was surprisingly affordable – $40 for the first hour, $30 for each hour after that, so I went ahead and booked it for three hours on March 17th.

Since I didn’t have any idea what the space looked like, though, my friend Candace and I decided to drive over there after a leisurely Saturday lunch to get a glimpse of it. Unfortunately for us, it was all locked up (I found out later they had a big photography prop swap meet earlier that morning and had just shut everything down for the rest of the weekend). So, I took a quick pic of what I could see, which is the yellow building in the iPhone pic below:

As you can see, there’s some nice outdoor space and a quaint front porch to utilize here as well, so I’m happy with that. I also liked the dirt road leading to the little shopping center’s parking lot: 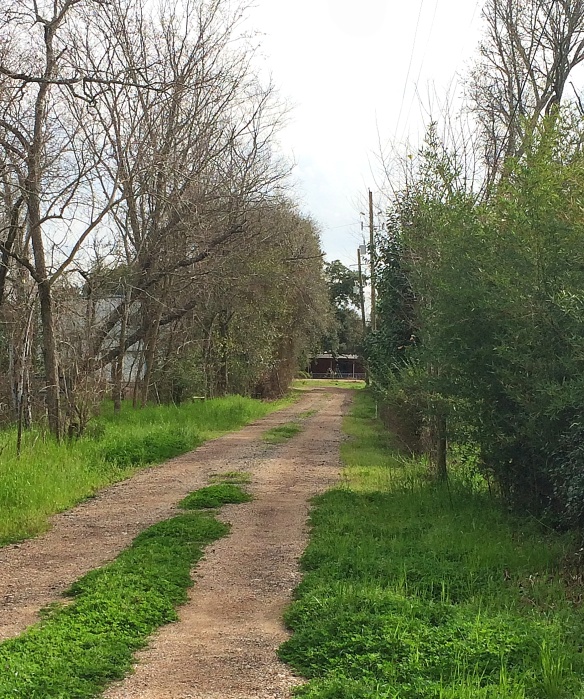 I could see a few cool shots happening here, too.

I’d actually brought along my Canon, so we decided to venture out a bit and see what we could capture. Unfortunately, my lack of skills with shooting outdoors got the better of me again, and some of these pics didn’t turn out as nice as I would have liked. I’ve got to start reading up on how to do this properly if I’m going to take friends out on location for photos. Anyway, here are the shots I got of my friend, who ended up getting way too excited about jumping once she got started:

Really wonky light and color in this one – 😦

These were all taken at another little shopping center area in the “old town” part of the neighborhood; in this center there’s a beer garden/concert venue that has a pretty cool space for all sorts of events and photos – hence the stage in the photo above.

I don’t know if it’s the lens or my camera settings that makes everything wonky color-wise when I shoot outside, or if it just wasn’t the right time of day when I was taking them, but I really struggle to get picture quality I am pleased with later when I edit. It’s almost as if this lens shoots too clean, and there’s an overabundance of clarity that makes it hard to draw the eye in to the subject of the shot. Maybe I just need to put more distance between my subject and the background to correct that, but the color always comes out weak also, and even with the 17-40 lens there’s too much aberration for my taste. I think the 85mm would have taken prettier pics, but then the aberration would have been worse, so who knows. And I can’t zoom in and out with the 85mm soooo…I’ve had all these complaints before, haven’t I? And yet I still haven’t figured it out.

See, like in the shot above – where’d the blue sky go? And there’s no pretty bokeh, just some slight blur. Overall, I think results like this is due my lack of technical knowledge regarding how a camera functions; I’ve tried to learn but it all goes to oatmeal in my head when I try to sort it out. So, how  I do figure things out is by taking shots I’m unhappy with, then looking at what I did that time and trying something different the next. The truth is, it’s gotten so automatic for me to shoot in Tv mode (controlling shutter speed only) while in my studio so I can get the level of clarity I want in my jump shots that I’ve forgotten there are other modes with which I can work. Sometimes I remember to switch to Manual mode when shooting outside or with the 85mm, but more often than not I forget to do so – and these shots are the result. I kept the camera in Tv mode during this walkabout simply because it was easiest for me to use, and as I always get rushed when shooting candidly or working with others I stuck with what I knew. But the shots would have better if I’d slowed myself down. Lesson learned.

In spite of all that, based on these shots, I also think it’s time for me to suck it up and get the 50mm f/1.4 that would be an upgrade from the cheap f/1.8 I used to own, but is still a far cry from the $1500 I’d have to cough up for the L-series version. It’s a good compromise cost-wise as well as great compliment to the two lenses I already own, and I feel the need for something new without spending a fortune (I can get the f/1.4 for about $350 – in fact, I’m off to buy it as soon as I finish writing this post).

Anyway, I know that it’s a cute photo and all so who cares, but I’m always going to be bugged by imperfections even if no one else notices.

The beer garden was quite big and had all sorts of cool little photo opportunity areas, like this one. It’s an old cigarette machine that’s spitting out some sort of artist tokens rather than cancer sticks, and I loved the color as well as the scratched-up mirror. Using that mirror eventually led to one of my favorite shots of the day:

So much to love here – the texture the mirror’s surface added to our photo as if I’d Pixlr-ed it, but I didn’t, the frame within a frame of the mirror and the borders of the machine, the cool reflection of that sitting area in the background – just a really fun shot.

I actually a took some non-person photos during this outing as well, but of course I was interested in processing the shots with humans in them first. I should be able to share the other pictures from this set soon, but I’ll leave for now with my other favorite photo using Candace as the subject. She was doing some leaping on the concert stage, and unlike my usual process I kept the camera in landscape mode rather than flipping the body over into portrait (which I do to create more height in the jumps) because I wanted to get the width of the stage. Her body got a little blurry because I was sketchy on the best camera setting to use, but I think this one turned out well:

So, pics of inanimate objects from this set to follow.