Our final excursion around town Saturday was to the new contemporary arts museum which opened up five months ago. My friend Candace is on the board of directors, so she wanted me to go by and see the space.

I should mention that my friend is on the board of directors for pretty much everything in this town. Keep in mind, by the way, that this is not the town in which I live, but a town that is very close to my neighborhood and is actually where my school is located. Katy, Texas is a very unique area, one of many that make up Houston and its surrounding neighborhoods, to be sure, but an area with its own attitude. It used to be a small town that was far enough away from Houston to be considered “the country” but those days have been over a long, long time – much longer than I’ve been alive anyway. However, Katy has maintained this sense of itself as a small town that is all its own, and as such, it has a history it has managed to keep alive, as well as scads of “old Katy” families whose members have wielded weird power within the little city for generations, it seems. My friend Candace is from one of these Old Katy families, so she knows everyone and is involved in everything. She attends things I’d never begin to understand, all sorts of Women’s Associations and Civic Luncheons and other mysteries are always on her schedule. It’s a town that still has all that stuff going on regularly, and to me, it’s all foreign (Renee Zellweger grew up in Katy, by the way, if that matters).

When she first told me this gallery was opening up, I figured it would be a disaster. There’s never been much demand for contemporary art in a small conservative town like this, and part of me figured it wouldn’t be “real” contemporary art anyway. But it appeared to be the real deal, at least as far as the artwork was concerned. I’m no art aficionado, but I was impressed with the collection of work I saw on display. It was also clear the director plans all sorts of talks and workshops in the space to reach out to the community and make the gallery a place for people to come together and celebrate art, which is pretty awesome.

However, I couldn’t help it – I found the director off-putting and unlikable. Perhaps it’s because she was talking to one of the board members that she went on and on so much while we were there, but she was exhausting.  Not only that, she was pretty negative. She spent most of her time complaining about how no one in this little town saw the value of investing in art, something which I would think one would investigate before opening up such a venue. And it’s true, she did seem to be aware of this before the gallery opened its doors, she just really, really liked pointing it out to us over and over again – how no one in the area thought a work of art was a valid use of two thousand dollars. It got weird after awhile, how she kept talking about it, while at the same time shooting down anything either I or Candace had to say about the subject, as if she’d already thought of or realized everything we tried to contribute to the discussion – which again, kept making me wonder why she opened up the gallery in the first place if she was already so acutely aware of something that clearly bugged the crap out of her so much. It got old pretty fast.

Not only that, but I became aware that I was one of these closed-minded patrons she was criticizing; I came into the store and wandered around, liked what I saw for sure, but had no intention of plonking down $1500 for any of the pieces. So in effect, she was repeatedly telling me what was wrong with my attitude about art. I started to feel guilty that I wasn’t ready to whip out my checkbook and invest in anything, but if that’s her selling style it isn’t going to work out too well for her, because it sure didn’t work on me. I just felt judged and uncomfortable.

She also went on a lot about her mission to ‘teach people’ about art, based in part on her assumption that no one in the area knew anything about it already (because they weren’t buying anything). It seemed a bit presumptuous to assume people needed all this teaching, but maybe it’s not – I’m just not sure lack of art sales = lack of art education. It could just mean lack of money. Yes, there is money in Katy, Texas, and lots of it – but this is still a depressed economy, and as far as luxury items go, art is up there pretty high at the top of the list of what people won’t spend money on when the belt is being tightened. And this is a very conservative area to boot, and art of the contemporary variety is going to be a hard sell in such a place even when the economy’s booming.

Besides which, insulting people with the tone of one’s conversation isn’t ever going to be a great way to convince people to cough up their cash. Take this conversation for example. While she was going on about how people in the area just don’t see the value of art and how it’s her duty to teach them about this, I asked her about photography and if she thought it was an easier sell. Keep in mind that as I ask this I am standing in the center of the gallery with my Canon strapped around my neck, and have been snapping photos of some of the newly constructed spaces she’d shown us with abandon. In other words, I am clearly a fan of photography. Her answer to my question was this: photography isn’t art except for very few exceptions, but it’s easy to understand and appreciate so sure, people are going to like it – but if I focus on photographs no one’s learning about art. Anyone can take photographs because it’s easy; sure, sometimes someone with a camera gets lucky by being in the right place at the right time, or snapping a shutter at just the right moment, or taking loads of shots so by default at least one of them comes out decent – but it’s too easy to really be valuable.  Wow, thanks for pointing out what crap my passion is while I’m standing in your gallery trying to figure out why I should spend my hard-earned money on what you’ve got hanging on your walls.

I bought a coffee mug.

A shot I popped off without looking while we were standing in an as-yet-unfinished area of the gallery. I guess it isn’t art, because she’s right – it was pretty easy.

In the end, I left the gallery feeling chastened, overwhelmed, and unworthy. At the time, I just smiled while she insulted my art of choice and ragged on people like me who won’t drop two grand for a heart sculpture made out of nails, but I kind of wish I’d snapped to her attitude more quickly and gotten bitchy with her. At the time though, I was tired, and not too quick on the take.

Here’s another example of how our conversation went throughout the visit – when she took us around the side of the gallery to show us the new space that’s under construction, I fell in love with the orange wall that wrapped around the side exterior of the building. What followed went like this:

Me: Oooh, I love this orange wall! I gotta go across the street and get a picture. It’s amazing!

Her: Yeah, I’m painting over it. It’s all going to be white.

The empty plant holders represent the emptiness of her soul

As usual, I’m saving my favorite shot for last. In spite of her contention that photography is easy, I did quite a bit of work on this shot to get it just how I wanted it – especially since I know that soon, sadly, this orange wall will disappear (she is, however, keeping the ironwork on the windows, I’m assuming to keep out photographers or people without money). I wanted to make the sky and concrete as white as the building, and get the oranges to really pop, including the orange line in the middle of the road. In order to do that I desaturated everything except the oranges, and made the blacks darker to contrast. I didn’t think much of this shot before processing, but the more I worked on it the more excited I got about its potential. Sure, I could have framed it better, but I still really like the way it came out. 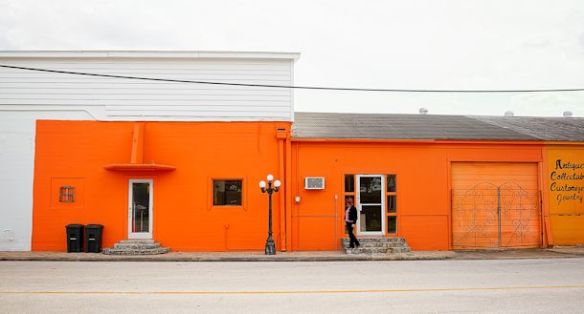 That’s the director walking down the stairs. I assume she’s thinking, I don’t know what that chick across the road is doing with that camera, but it sure isn’t art!

I thought about editing the power line out of the shot, but decided against it in the end. I kind of like it being there; it draws an interesting line and adds something of the mundane to the scene. Okay, not really – I was just too lazy.